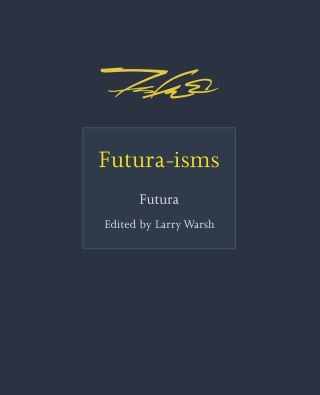 Futura is a living legend—a world-renowned painter, designer, and photographer who was a pioneer of graffiti art and New York City’s “subway school.” His radical abstract work in the street and on canvas established him as a central figure in an important art movement that included Jean-Michel Basquiat, Keith Haring, Rammellzee, Lee Quiñones, and Dondi White. Futura-isms is a collection of essential quotations from this fascinating artist. Gathered from four decades of interviews and panel discussions, this memorable selection illuminates Futura’s thoughts on legal and illegal art, his influences, fellow artists, and the past, present, and future. He also offers colorful memories of his adventurous life—growing up in New York City, serving in the Navy, touring with The Clash—and reflects on how his experiences have shaped his art.

Select quotations from the book:

Futura: Futura, born Leonard McGurr, is a renowned artist—a graffiti pioneer, clothing designer, and graphic designer whose work has been shown at museums around the world, including MoMA PS1, the Museum of Contemporary Art, Los Angeles, and the Groninger Museum. In recent years, he has exhibited and collaborated with artists and designers such as Takashi Murakami, José Parlá, Rei Kawakubo, and Virgil Abloh. He lives in Brooklyn, New York. Instagram @futuradosmil Larry Warsh has been active in the art world for more than thirty years as a publisher and artist-collaborator and was a founding member of the Basquiat Authentication Committee until it’s dissolution in 2012. He is also the editor of Weiwei-isms and Humanity, by Ai Weiwei; Basquiat-isms and The Notebooks, by Jean-Michel Basquiat; and Haring-isms, by Keith Haring (all Princeton).